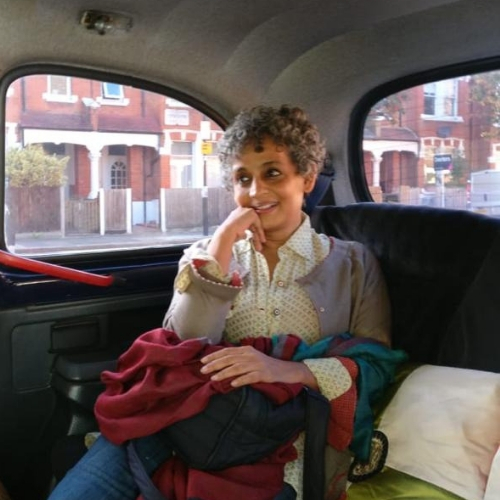 Arundhati Roy
Writer
Arundhati Roy is a writer who was born in the tea plantations of North East India and grew up in Kerala. She studied architecture and urban planning at the Delhi School of Architecture. She wrote two screenplays for films directed by Pradip Krishen; In Which Annie Gives It Those Ones, 1989, which won the National Award for Best Screenplay and Electric Moon, 1991. Her first novel The God of Small Things, published in 1997, won the Booker Prize and has been translated into forty-two languages. Her second novel, The Ministry of Utmost Happiness, written over 10 years, was published in 2017. In the twenty years that lay between her two works of fiction, Arundhati Roy authored more than fifty non-fiction pieces. Her first major essay, The End of Imagination was written in 1998 as a response to the nuclear tests conducted by the Indian government.

In that essay, she cautions: “If there is a nuclear war, our foes will not be China or America or even each other. Our foe will be the earth herself. The very elements – the sky, the air, the land, the wind and water – will all turn against us. Their wrath will be terrible. Our cities and forests, our fields and villages will burn for days. Rivers will turn to poison. The air will become fire.”

Rigorously researched and persuasively argued, Roy’s essays cover a vast terrain of issues - capitalism, imperialism, the war on terror, social and environmental justice, India’s caste-system, and most importantly resistance. Her book-length essay The Doctor and the Saint is a deep and provocative engagement with the Ambedkar-Gandhi debate. Her many anthologies of essays include The Algebra of Infinite Justice (2001), An Ordinary Person’s Guide to Empire (2005), Listening to Grasshoppers (2009) and Broken Republic (2011). Taken together, Roy’s essays are a reckoning with the promises of democracy in the late 20th and early 21st Century.

In The Ministry of Utmost Happiness, which has been translated into forty-nine languages, Roy moves purposefully away from the literary style of The God of Small Things to tell an extraordinarily expansive story that embraces a populous but vivid cast of characters spread across multiple geographic locations. In lines from the book, now oft-quoted, she writes:

Arundhati Roy lives in Delhi with her two dogs