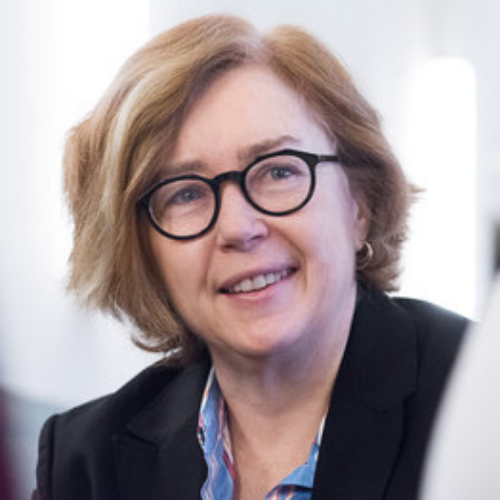 Terry McGovern
Stand-up
Terry McGovern teaches at the Columbia University Mailman School of Public Health, where she serves as Harriet and Robert H. Heilbrunn Professor, Chair of the Heilbrunn Department of Population and Family Health and Director of the Program on Global Health Justice and Governance. At Mailman, she teaches courses in health, human rights and environmental justice advocacy. She also currently serves as a member of the UNFPA Global Advisory Council, the HIV Prevention Coalition, the Standing Lancet Commission on adolescent health and wellbeing and the UCL-Lancet Commission on migration and health.

Previously, she founded the HIV Law Project in 1989 where she served as executive director until 1999. She has successfully litigated against the federal, state and local governments; two cases are S.P. v. Sullivan, which forced the social security administration to expand HIV-related disability criteria so that people can qualify for Medicaid and social security and T.N. v. FDA, which eliminated a 1977 FDA guideline restricting the participation of women of childbearing potential in the early phases of clinical trials. As a member of the National Task Force on the development of HIV/AIDS drugs, she authored the 2001 federal regulation authorizing the FDA to halt any clinical trial for a life threatening disease that excludes women. From 2006 until 2012, she was Senior Program Officer in the Gender, Rights and Equality Unit of the Ford Foundation.

Will do a humorous monologue on philanthropy, academia, having a family member killed in 9/11 (yes I said that) and being a white American
Translate »